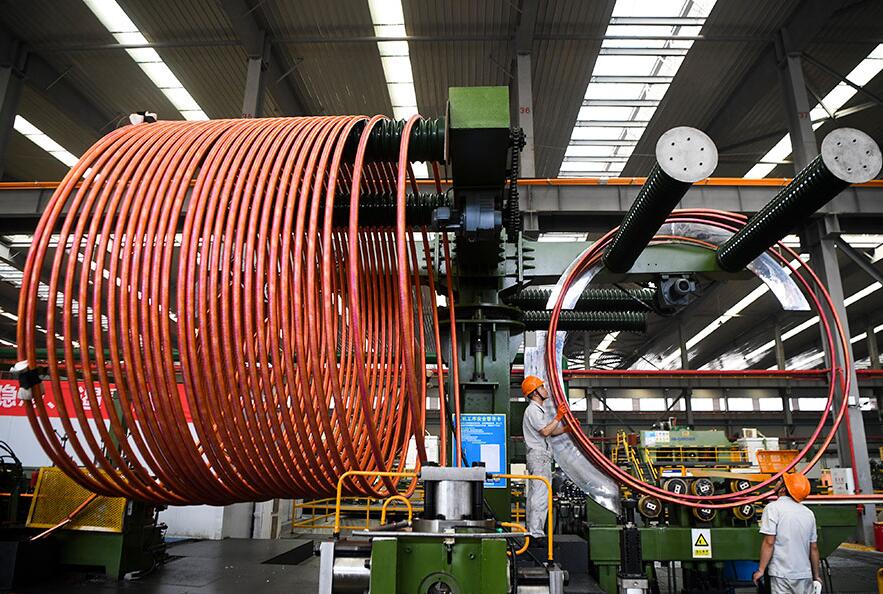 The Caixin China General Manufacturing PMI rose for the fourth straight month to 51.7 in October, the highest level since February 2017, versus 51.4 in the previous month, said a report jointly released by media group Caixin and information provider IHS Markit on Friday.

A PMI reading above 50 indicates expansion while one below the number shows contraction.

The stronger expansion of the manufacturing sector came as market conditions improved and client demand increased both at home and abroad, the report said.

Total new orders that the surveyed manufacturers received in October recorded the quickest growth in 81 months, with new export orders increasing for the first time in five months, according to the report.

"If the improvement in demand, including that generated by infrastructure projects and exports, is able to continue, the manufacturing sector can gradually build a foundation for stability," Zhong said, adding that the recovery in export orders may be attributable to the US government's exemption of more than 400 types of Chinese products from additional tariffs.

Meanwhile, business confidence remained weak, Zhong said in the report, citing that deliveries of inputs were further delayed in October.

The official PMI for October, released by the National Bureau of Statistics on Thursday, showed a dimmer picture of China's manufacturing sector as the figure dropped to 49.3, versus 49.8 in September and 49.5 in August, the sixth straight month of contraction.

"Taking the official and Caixin figures both into account, the manufacturing sector should have continued contraction in October as a whole, while some manufacturers saw upturn in market demand," said Yang Weiyong, an associate professor of economics at the University of International Business and Economics in Beijing.

"We are at the brink of a major manufacturing recovery considering the cyclical pattern of the Chinese economy, predicated on policy support from both the fiscal and the monetary side and progress toward the resolution of Sino-US trade friction," he said.

But it is now too early to confirm a solid beginning of such a recovery, Yang said, adding that short-term factors played a large part in the uptick of the official manufacturing PMI in September.

"Signs of upturn are still fragile," he said, citing that lackluster investment and the shortened payroll of the manufacturing sector pointed to protracted pressure faced by the sector amid domestic downside risks and external uncertainties.

The rate of job shedding in the manufacturing sector quickened in October partly as enterprises controlled costs, said the Caixin report, while the NBS sub-gauge of staff level remained in the contraction territory last month despite a month-on-month increase.

Yang called on the authorities to ramp up efforts to retrain the workers that are laid off by low-end manufacturers, whose capacity of absorbing employment is on the decline, smoothing their re-employment in higher-end sectors.

To foster a sustainable development of the manufacturing sector, China should strengthen education efforts to nurture high-skilled workers, through learning from the apprenticeship system in Germany, boost the number and the quality of technical schools and other measures, Yang said.