Views :222 Recommendation: Votes:0 Discuss:0
US manufacturing has shown signs of recovering from a year-long downturn but is facing a fresh challenge from Boeing's troubles. 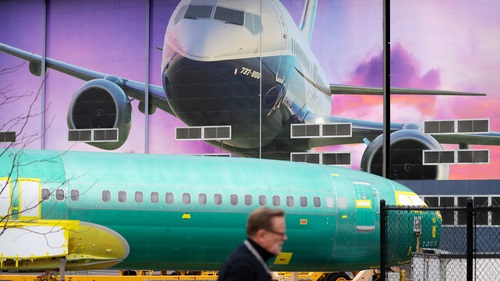 The Federal Reserve said Friday that factory output declined 0.1% last month after eking out a 0.1% gain in December. Excluding the production of airplanes and parts, factory production rose 0.3%.

U.S. manufacturing has shown signs of recovering from a year-long downturn but is facing a fresh challenge from Boeing's troubles, which also affect hundreds of suppliers. Manufacturing output is down 0.8% in the past year, hurt by the U.S.-China trade war and slower global growth.

Overall industrial production, which includes output from mines and utilities, dropped 0.3% in January, held back by a 4% drop in utility production because of unseasonably warm weather.

Other reports suggest manufacturing is picking up, particularly outside aircraft production. The Institute for Supply Management, a trade group of purchasing managers, said earlier this month that factory activity expanded in January for the first time in six months.

The ISM’s survey found that new orders and production rose in January, and while factories still cut jobs, they did so at a slower pace.

The viral outbreak in China is also likely to damage the global economy and disrupt many manufacturers’ international supply chains. Economists at Goldman Sachs forecast that the Boeing shutdown and coronavirus will lower the U.S. economy’s growth in the first three months of this year by roughly three-quarters of a percentage point to an annual rate of 1.7%.