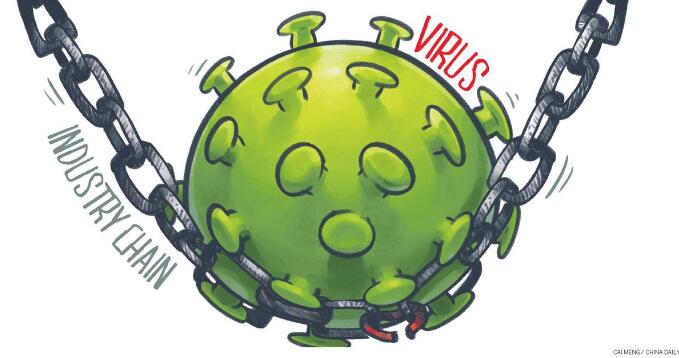 It appears the COVID-19 pandemic has been subdued in China, and companies operating in different regions of the country have begun to resume work and production. However, the pandemic continues to spread around the world, with an increasing number of confirmed infections. At the time of writing on April 24, the number of global confirmed infections had surpassed 2.5 million, and Europe and the United States are the worst-stricken regions.

Against this background, countries stricken most by the disease are upgrading their prevention and control measures, which have, to a varying degree, affected local normal production and business activities. China is the world's second-largest importing country and an important trading partner of Europe and the US. Thus, the country's supply chain will also be influenced to a certain extent, and the problem will be particularly pronounced for some industries.

Our analysis shows that in the medium term, if the pandemic grows further the world over and lasts longer, China's import supply chain will face severe challenges, which may even bring bottlenecks to the country's policy aimed at expanding domestic demand.

From a short-term perspective, the external risks faced by China's import supply chain are as follows:

First, industries that will be hit most severely on the supply side are automotive, machinery, engines, chemicals, pharmaceuticals and aerospace.

Second, industries that will be least impacted on the supply side are soybeans and semiconductors.

Third, industries whose supply chain will be temporarily unaffected are cotton, iron ore and coal.

Nevertheless, for some industries, the outbreak has exerted more serious impact on the demand side, while the impact on the supply side has not yet manifested for the time being.

Based on the United Nations Comtrade Database, we made a list of key countries that are mainly stricken by the pandemic, and then made a preliminary observation on the risks to China's import supply chain.

In order to determine the list of key countries, we observed the top source countries of China imports, and their current pandemic situation. The following countries were selected as key observation targets: the US, Germany, Italy, France, Britain, Australia, Brazil, Japan and South Korea.

Based on the different stages of the pandemic, these nine countries can be divided into three categories. One, epicenters: the US, Germany, Italy, France, and the UK. Two, contagion being observed: Australia, Brazil, and Japan. Three, contagion being controlled: South Korea.

Among China's overall imports, the top three commodities imported from the US are aircraft, spacecraft and related components (54.4 percent), engines (42 percent), and cotton (33.6 percent). Other imports from the US also accounted for an important proportion, such as optical imaging equipment, mechanical equipment, chemicals, aluminum and its products, agricultural products (soybeans), vehicles, pharmaceuticals, paper products and raw materials. In the short term, the temporary lockout of some US companies is expected to largely affect China's machinery manufacturing, automobile industry, and medical industry.

Germany is an important global powerhouse of auto parts. Thirty-two percent of China's imports of vehicles and accessories come from the European country. In the meanwhile, pharmaceutical products and medical devices imported from Germany accounted for 24.5 percent and 17.9 percent, respectively. The pandemic will have a certain impact on Germany's exports of automobile manufacturing, pharmaceutical, and machinery products. Related downstream companies in China may face some supply chain risks.

Let's now look at some key industries that are bearing the brunt of the pandemic.

As the automobile production processes of the above-mentioned three countries have been affected to a certain extent, the supply chain risks faced by Chinese companies will become a real problem. If the pandemic in Japan worsens, the supply chain risks of these two types of imports will grow. If China's domestic consumption demand declines significantly, the impact on the supply side will be eased.

Engines: China imports 75 percent of its engines from the US, Germany, Britain, France and Italy. These countries are stricken seriously by the outbreak. The temporary lockout of US automakers Ford and General Motors may affect the supply of automobile engines. In addition, Italian diesel engines, French turbines, and gas turbines all account for a relatively high proportion of China's imports. The situation may have a partial impact on China's downstream industries such as automobiles, ships and power generation.

Chemical industry: Chemicals imported from the US, Germany, Britain, France and Italy account for 36 percent of China's total chemical imports. Although the overall proportion is not particularly high, some products, like catalysts and reagents, rely much on imports. So far, the supply chain of importing chemical products has already been stricken.

Aerospace and its parts: China imports 83 percent of the aerospace products and components from the US and France. US aircraft manufacturer Boeing halted its production activities in March, while European multinational aerospace corporation Airbus partially resumed production and assembly work, following the implementation of stringent measures. It will have a negative impact on China's imports for related sectors, and may even affect the delivery of China's existing aircraft orders.

Now, let us look at the least stricken industries:

Soybeans: They serve as an important fodder for China's domestic breeding industry. Ninety-four percent of China's soybean imports are from Brazil and the US.While the pandemic has spread, the price of soybeans on the Chicago Board of Trade (CBOT) had climbed for several consecutive trading days. But the price fell back then, remaining at a historically low level since more than a decade. Therefore, the impact of the outbreak on soybean imports is still not significant.

Semiconductor products: The Chinese mainland imports semiconductors and components mainly from Taiwan province, South Korea, Japan, Malaysia and the US.

Currently, the pandemic in South Korea has been initially controlled, and factories have resumed production. The situation in Japan and Taiwan province is also relatively stable. The imports of US semiconductors account for a relatively low percentage. Therefore, the normal production of the semiconductor downstream industry will not be significantly affected for the time being.

Iron ore and coal: Australia and Brazil are two main source countries for China's imports of iron ore. Brazil is also the main coal supplier for China. The novel coronavirus has not yet broken out in a major way in the two countries, so supply-side problems won't occur in the short term. As for cotton imports, the pandemic has affected the apparel industry, causing orders to shrink significantly. It has led to raw material cotton facing a severe shock on the demand side rather than the supply side.

Xu Qiyuan is a research fellow at the Institute of World Economics and Politics, which is part of the Chinese Academy of Social Sciences. Zhang Zixu is a research associate with the Graduate School of CASS.