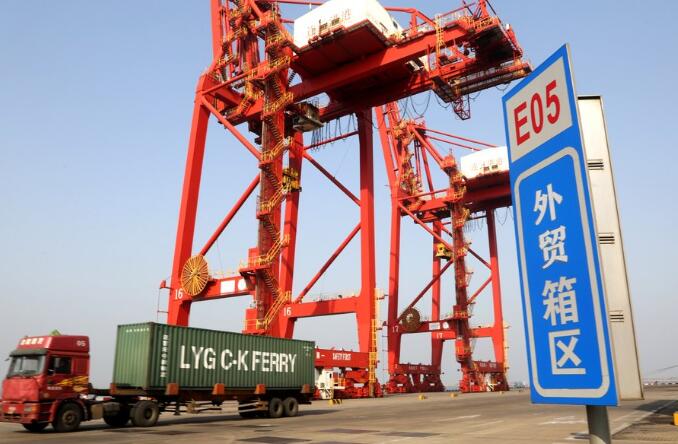 A container is transported on a truck at the container terminal of the Lianyungang Port in Lianyungang City, east China's Jiangsu Province, Jan 14, 2021. [Photo/Xinhua]

China's foreign trade soared by 32.2 percent on a yearly basis to 5.44 trillion yuan ($837.3 billion) in the first two months of the year, creating more confidence in the prospects of export growth and economic recovery for the rest of the year, officials and experts said on Sunday. 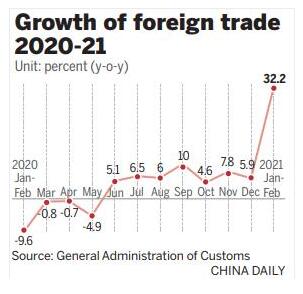 They said outstanding new trade figures released by the General Administration of Customs on Sunday proved once again that China's manufacturing sector and its foreign trade are contributing, to a large extent, to the global supply chain and meeting the demand of consumers worldwide.

Thanks in part to the growing demand for goods of recovering markets in the European Union and the United States－recoveries boosted by their governments' fiscal stimulus measures－there has been significant growth in China's exports, with those to Europe, the US and Japan increasing 59.2 percent year-on-year, said Li Kuiwen, director-general of the administration's statistics and analysis department.

As the world's only major economy to grow last year, China's recovery in foreign trade has substantially stabilized global industrial chains and supplied a variety of products amid the pandemic, ranging from vaccines and mask-production machinery to work-from-home electronic products for foreign consumers, said Gao Lingyun, a research fellow at the Chinese Academy of Social Sciences' Institute of World Economics and Politics.

The encouraging trade figures are partly due to the lower base from the first two months of last year, when China's foreign trade was affected by COVID-19 outbreaks, he said.

But Li further explained that compared with data from 2018 and 2019, the 2021 year-on-year trade growth during the two-month period still remained up to 20 percent higher.

The outlook for China's exports, advanced by vaccine availability and stimulus policies globally, will remain positive this year, with new business models such as cross-border e-commerce emerging as a new engine of the country's foreign trade, said Gu Xueming, a member of the 13th National Committee of the Chinese People's Political Consultative Conference and president of Beijing-based Chinese Academy of International Trade and Economic Cooperation.

China's trade with the Association of Southeast Asian Nations reached 786.2 billion yuan in the first two months of 2021, up 32.9 percent year-on-year, while trade with the EU rose 39.8 percent to 779.04 billion yuan, according to the General Administration of Customs.

The goods trade value between China and the US grew 69.6 percent year-on-year to 716.37 billion yuan during the same period.